Dufry reports that revenue for the first quarter of 2022 reached 1.12 billion Swiss francs, representing organic growth of 144.5% compared to the previous year.

The company said first-quarter performance was characterized by continued improvements in January and February, leading to higher sales trends in most parts of the world from March.

Performance during the first quarter was driven by significant progress in EMEA and positive contributions from the Americas, particularly the United States and Central America and the Caribbean.

More than 1,960 stores were open worldwide at the end of March 2022, representing approximately 85% of stores and more than 90% of 2019 sales potential. There was an upturn in commercial activity with 21,915 m² of commercial space new and renewed contracts signed during the first quarter.

Julián Díaz, CEO of Dufry, said: “Until the last week of January, the first quarter was still impacted by certain travel constraints. Since February, there has been an easing of restrictions and a general improvement in the health situation. This resulted in an immediate adoption of travel and travel retail as an integral part. The positive trend has so far continued in April and May, with contributions from almost all regions of the world. Comparing February and April since the beginning of the year, Dufry’s turnover has more than doubled. Within EMEA, the best performing region was the Mediterranean, but Southern Europe and the UK also made significant progress.

“As for the Americas, Central America and the Caribbean, as well as the United States, continued to perform above the group average. Regional performance also began to be supported again by our South American operations, notably in Argentina, Colombia and Ecuador. While most parts of the world are seeing an upward trend in sales, most APAC countries are still adhering to a zero-Covid policy. Therefore, most operations, which cater to international passengers, continue to be closed.

“The positive sales trend is reflected in our strong cash flow performance for the quarter. Equity Free Cash Flow reached CHF -87 million – a significant improvement over our first quarter 2020 and 2021 performance of CHF -483 million and CHF -219 million respectively, but also compared to historical free cash flow performance of the first trimester. Despite the typical seasonality of the business, Equity Free Cash Flow in Q1 2022 still performed better than the pre-crisis Q1 2019 EFCF of -CHF -123 million. This result is positively impacted by actions we have taken over the past two years, including concession relief and tighter cash management, with Q1 2022 also benefiting in part from working capital movements and a certain phasing of CAPEX.

“Our financial situation gives us the flexibility to focus on continued reopenings and business initiatives. More than 85% of our stores are open, which represents more than 90% of the 2019 sales potential. We signed important new and renewed contracts, for example, in attractive tourist destinations such as Bali, the Dominican Republic, the California (USA), Mexico and Bulgaria, among others.

Díaz confirmed the company’s commitment to its employees in Ukraine, all of whom have been offered relocation with their families to other Dufry locations around the world.

On the transfer of his functions to the successor CEO Xavier Rossinyolhe said they were working closely together to enable a well-organized transition: “I would like to express my gratitude to all of you, our stakeholders, and in particular to the Board of Directors and all of Dufry’s colleagues for the support I have received over the past eighteen years. I am extremely grateful for the opportunity I have had to lead and contribute to the development of this great company, and I firmly believe in the prosperous future by Dufry.

Revenue for the first quarter of 2022 reached 1.12 billion francs, representing organic growth of 144.5% compared to the previous year. The mix of categories provides a similar picture to fiscal 2021, reflecting current reopening patterns. Perfumes and cosmetics continued to be the predominant category, followed by food and confectionery and convenience product offerings. Airports gained channel mix share and significantly improved their performance during the first quarter of 2022 due to the resumption of domestic, intra-regional and transatlantic travel.

EMEA
Revenue was 506 million francs in the first quarter of 2022, compared to 135 million francs in the same period of 2021. The first quarter recorded an organic growth performance of 283% year-on-year (yoy) . Almost all regions contributed positively from March in line with the improvement in the health situation and above all the increasing relaxation of travel protocols. Mediterranean countries, including Turkey, Greece and the Middle East, performed best. But the United Kingdom, France, Spain, Eastern Europe and Africa also made significant progress, benefiting in particular from the demand for leisure. The current difficult geopolitical situation has impacted local Russian and Ukrainian operations, with limited spillovers to the wider region so far.

Asia Pacific
Revenue was CHF 22 million in the first quarter of 2022, compared to CHF 24 million in the same period of 2021. Organic growth reached -7.9% compared to 2021, as restrictions were strengthened around the Winter Olympics in China in February and some increase in Covid cases since the beginning of the year. While some countries like Australia, Bali and Cambodia have begun reopening, other governments are still adhering to a zero-Covid approach or restrictive measures. As soon as restrictions are lifted, demand should show a rapid rebound, similar to other parts of the world. The region’s best performers were China and Macau due to domestic travel activity, with temporary disruptions whenever cases occur.

Americas
Turnover amounted to 545 million francs in Q1 2022 against 241 million francs a year earlier. Organic growth was 122% compared to 2021. The region has seen a rapid rebound since February. This applies in particular to domestic, intra-regional and increasingly transatlantic travel in the United States, as well as tourist travel to Mexico, Central America and Caribbean destinations, including the Dominican Republic and the islands of the Caribbean. South America also started to trend upwards, notably in Argentina, Colombia and Ecuador. 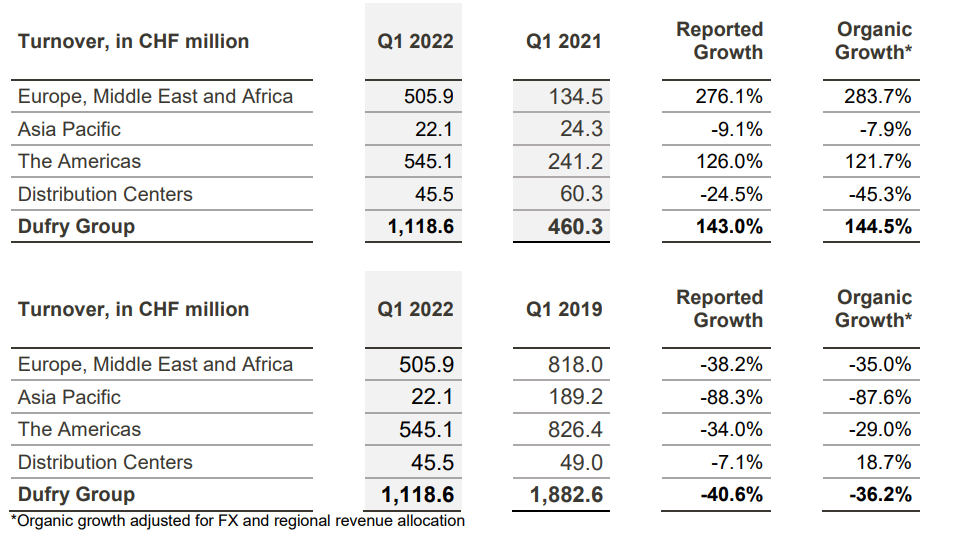 The regional breakdown of net sales reflects current travel habits and saw the contribution of EMEA with 46%, Asia-Pacific with 2% and the Americas with 49%. Global fulfillment centers accounted for 2% of Q1 2022 net sales; reach a more normalized level as Hainan is now supplied by the local joint venture in China.

During the first quarter of 2022, Dufry succeeded in winning several new concessions and extending major contracts with a total area of ​​21,915 m². Among the contracts won was the new building Felipe Angeles International Airport in Santa Lucia, Mexico, and the Recife International Airport, Brazil. Both additions contribute to Dufry’s established footprint in the region, also demonstrated by the contract extension with La Romana International Airport and Seaport in the Dominican Republic for ten years. Another important tourist destination is the renewal of the duty-free concession at Gusti Ngurah Rai International Airport in Bali for six years. In addition, Dufry was granted a five-year extension of its duty-free, duty-paid concession to Helsinki AirportFinland, and a ten-year extension to Ontario International Airport (CA, USA), which serves more than five million travelers a year. Also in the United States, Dufry announced a partnership with Starbucks operate and expand stores at U.S. airports, with the first stores slated to open in LaGuardia Airport at the beginning of summer.